How did a small village outside of Lisbon became a magnet for whimsy and extravagance?

The town of Sintra, sprawling just below the tops of the mountains of the same name, is studded with outlandish palaces, fairytale castles, even a toy museum, each with an intriguing story. Perhaps the area’s ancient occultism influenced the designers of its many elaborate residences.

Stone Age settlers were first attracted to the valley because of its lushness. It receives more rainfall than the surrounding area and is often shrouded in mist. The landscape was called the Mountains of the Moon by the Romans. Byron called the area “a glorious Eden.” 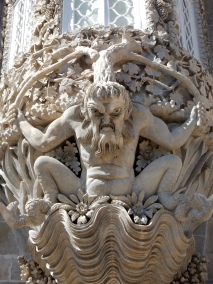 After the Romans left, the Moors built a massive fortress on one of the highest summits in the 800s. The views from the top of the Moorish Castle are extraordinary. The day I visited was so windy, I thought I would be blown over the side of the ramparts.

Soon, Portugal’s royalty preferred Sintra for “summering.” In the town’s main square is the National Palace, built by the Moors and rebuilt in the 1400s and 1500s by Portugal’s monarchy (using Vasco da Gama’s haul). The upstairs’ rooms are grand and airy with fancifully painted ceilings.

One is divided into octagonal panels decorated with swans. Another features magpies. The story goes that King John I was caught kissing one of the queen’s ladies-in-waiting. Frustrated by the ensuing gossip, he had the ceiling painted with blackbirds, each representing one of the women in the court. The palace’s signature conical chimneys hover over a huge lower-level kitchen.

On another peak is Pena Palace, a crazy mash-up of architectural styles built in the 1840s by Prince Ferdinand for Queen Maria II. The palace is a hodge-podge of turrets, ramparts, domes, a drawbridge, and a clock tower, all painted in primary yellow and red. The inside is decorated lavishly. The ballroom features life-sized statues of turbanned Arabs holding torches. The views of the kingdom from the terrace are amazing.

A number of mansions are scattered around Pena Park, including Challet Biester, the setting for Roman Polanski’s The Ninth Gate, a movie about summoning satan starring Johnny Depp. Nearby is the elegant Seteais Palace and the exotic Monserrate Palace with its mysterious subtropical gardens. The Capuchos Convent is a maze of narrow corridors, chapels, and tiny rooms carved out of rock, all lined with cork. Cork is used to keep out the humidity.

Sintra’s Modern Art Museum features works by Warhol, Pollock, Miró, and Picasso. The Toy Museum holds a collection of more than twenty thousand items, including three-thousand-year-old Egyptian toys, Hornby trains from the 1930s, Nazi toy soldiers made in Germany during World War II, birthday and Christmas gifts given to royal children, and some of the first toy cars. It’s Peewee’s Playhouse. 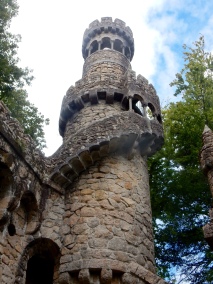 Perhaps the quirkiest is Regaleira Palace and Gardens, an estate designed by a stage-set artist in 1912. The gardens around the villa couldn’t be more theatrical. It’s a mythical, mysterious labyrinth of fountains, statues, towers, waterfalls, grottoes, and lakes. The Initation Well is a vertigo-producing spiral staircase leading 30 meters into the ground. While descending, I expected to see Alice-in-Wonderland free-falling down the center. At the bottom a series of cave tunnels lead to the edge of a lake. The tower and tunnels represent heaven and hell. Or not. Knights Templar-Freemason conspiracy theorists love this place. So do kids.

Once a playground for the aristocracy, Sintra is now a fantasyland for tourists.

Leave a Reply to chris and trish Cancel reply