A ramble through Dingle

The rain was steady, as I strained to see the next waymark on the climb up Mount Brandon.

The black marker posts did not identify an obvious footpath, but instead indicated the general direction—uphill through a marshy field of rubble. The markers stood every hundred yards or so, but were sometimes too far ahead to be seen.

I had been climbing for about two hours. The footing was difficult. Rivulets of rainwater ran down the mountainside through channels that had to be circumvented. A vertical swamp. Each step, I slipped on a rock or plunged into an ankle-deep puddle. My shoes were soaked.

Looking up, I could not measure my progress toward the shoulder of the mountain. Dark rain clouds obscured Brandon’s summit. Once inside the cloud bank, I could see only the dim shapes of boulders and scrubby trees. The markers faded from view.

I wasn’t exactly lost, but I was stranded. Somewhere ahead was a trail that would lead me down the other side of the mountain, but in the fog I couldn’t find it. END_OF_DOCUMENT_TOKEN_TO_BE_REPLACED

To sleep in the hill town of Motovun, Croatia, a steep hike is necessary, either a short one from the car park at the halfway point or a long one from the bottom of the hill. The long one of over one thousand steps passes the quaint boyhood home of Mario Andretti. END_OF_DOCUMENT_TOKEN_TO_BE_REPLACED

The region now known as Bosnia-Herzegovina is a melting pot that never melted.

Bosna i Hercegovina is the country’s official name. It is also spelled Bosnia-Herzegovina and sometimes abbreviated to BiH, B-H or B&H. For the sake of convenience, I’ll refer to it as Bosnia.

The country is the size of West Virginia with a population of nearly four million. It is bordered by Croatia, Serbia and Montenegro. Sarajevo is its capital.

Bosnia’s currency is the convertible mark, but most Bosnian businesses accept euros and Croatian kuna as well. Bosnians joke they are the only predominantly Muslim country in the world with no oil. END_OF_DOCUMENT_TOKEN_TO_BE_REPLACED

In 1942 Fascist Italy imprisoned the city, encircling it with nineteen miles of barbed wire.

On the perimeter, 206 watchtowers and bunkers were built. Land mines were set. Nearby homes were razed. Twenty-five hundred guards patrolled the wire.

For over three years, Ljubljana was cut off from the rest of the world. The city’s residents struggled to stay alive, as their conditions worsened.

Italy’s intention was to stop the city’s support for Yugoslavia’s anti-Fascist forces. The plan didn’t work.

Throughout the war, the underground movement in Ljubljana succeeded in sneaking people, supplies, and information through secret passages under the wire. END_OF_DOCUMENT_TOKEN_TO_BE_REPLACED

Posted on February 6, 2019 by kirkphillips

After breakfast, our group of nine turned in our packed duffels and left Cusco in the rain. The day cleared as our van headed toward the Sacred Valley, an area that has supported farming for centuries. Both sides of the Urubamba River are terraced for growing crops.

The van turned onto a dirt road and climbed through adobe villages into the mountains. Election signs were painted boldly in black and red on whitewashed stone walls. Twice we were stopped by herds of sheep in the road. END_OF_DOCUMENT_TOKEN_TO_BE_REPLACED

Posted on February 6, 2019 by kirkphillips 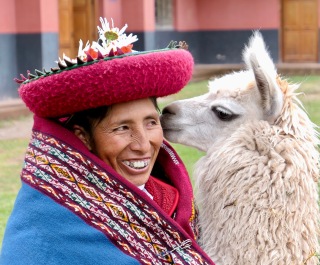 A few days before arriving in Peru, I began taking acetazolamide pills as a precaution against altitude sickness.

Some people are not affected by high altitude, but I didn’t want to risk enjoying my trek to Machu Picchu in order to find out if I was one of them.

Other measures that were suggested to me included acclimating over several days, staying hydrated, taking ibuprofen tablets, drinking the local coca tea, and chewing coca leaves. I followed all recommendations. END_OF_DOCUMENT_TOKEN_TO_BE_REPLACED

In the animal kingdom

I had every intention of following Galápagos National Park’s simple rule: maintain at least six feet of distance from the wildlife.

However, the animals were not as compliant.

Blue-footed boobies waddled right up to my hiking shoes. Sea lions grazed me playfully when I snorkeled. Brown pelicans stood beside me, as together we watched the fishmongers in the harbor.

Even giant tortoises lifted their great heads and ambled in my direction, as if they recognized me from long ago.

In Ohio, wild animals run for cover when humans appear; in the Galápagos Islands, they yawn.