Shakedown tour of the Pyrenees

Posted on August 1, 2013 by kirkphillips 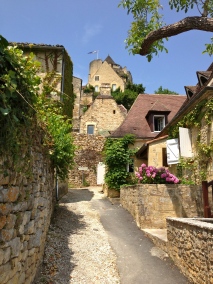 In Pamplona, the week-long Festival of San Fermín raged on. Again, the bulls ruled the course, goring two and injuring twenty-one more in a historic pile-up at the ring’s entrance.

To read about my visit to Pamplona, please see the previous post, “Running of the fools.”

However, it was time to leave the revelry behind. Like guests sneaking out of a raucous party, friends Rob and Mandy and I checked out of our hotel in Pamplona and begin our driving tour of northern Spain and southern France.

At the rental agency, the agent explained the workings of our nearly new Renault wagon. Gesturing with disdain at the push-button start, he huffed, “French!”

Our itinerary included stops in Spanish and French Basque Country, the Dordogne and Languedoc regions of France, and the Catalunya region of Spain. 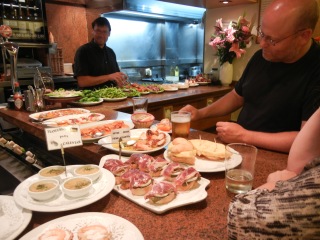 We drove to San Sebastián, a busy resort town on the Atlantic. Hotel Parma was perfectly situated with a view near the Old Town, but away from the noise. We pintxo barhopped through the narrow streets, stopping at Bar Borda Berri, Bar Txepetxa, and Bar Tamboril. Enjoyed wild mushroom risotto, anchovies with spider-crab sauce, shrimp kabobs, and txakoli wine. 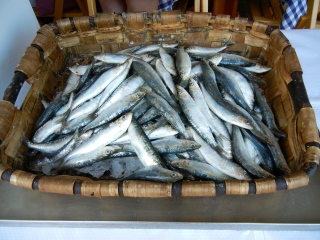 Bastille Day! On the way to the Bordeaux region of France, we stopped briefly in the Pyrenean towns of Ainhoa and Espelette, the latter famous for its red peppers. Strands of them hung on the outsides of the villages’ buildings. Picnicked on local cheese and fruit. 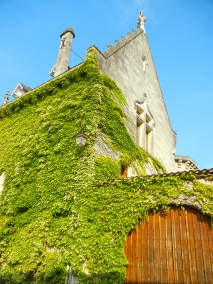 Near a crossroads called Saint-Laurent-des-Combes in the middle of the region’s vineyards, we found Moulin de la Grangère. The owners, Marie-Annick and Alain, invited us to cool off in their pool after checking us into our rooms in the old blue-shuttered mill. We watched their dog chase lizards.

Marie made dinner reservations for us in St. Émilion at L’Huitrier Pie. The town is charming, especially at sunset as the yellow stone buildings glow in the light. Before dinner, we strolled steep cobblestone streets and sampled the local variety in the wine shops. St. Émilion has been a wine town for over eighteen hundred years. I can only describe my delicious dinner as pulled-duck barbecue.

Marie served a breakfast of yogurt, croissants, jam, and coffee outside overlooking the vineyards. On the way to Sarlat-la-Canéda, we stopped for diesel fuel and struggled with both the French language and the automated pump. A woman in the next lane rescued us.

Visited the Prehistory Welcome Center in Les Eyzies-de-Tayac-Sireuil for background on the Cro-Magnon cave paintings in the area. At Grotte de Rouffignac (Cave of a Hundred Mammoths), we took an electric train back into the cavern along an ancient dried-up riverbed to view engravings of mammoths, rhinos, horses, goats, and bison. The cave, discovered in 1956, has more drawings of wooly mammoths than any other. The drawings are exquisite, even from today’s perspective. It was both mind-boggling and humbling to contemplate that they were created thirteen thousand years ago. 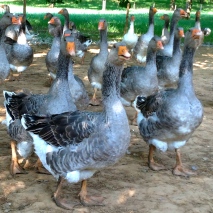 For once, we got lucky finding the hotel, a golden stone manor on the northwest side of Sarlat called Hôtel La Verperie. I stayed in the main house, two flights up a narrow, steep staircase. Before dinner, we drove south of town to the Elevage du Bouyssou goose farm. Nathalie, the owner, showed us a two-month-old gaggle of a hundred inside a barn and a four-month-old gaggle in a pasture. Finally, we watched as her husband, Denis, force-fed a meal of ground corn and water to the six-month-olds. Per goose, the process only takes a few seconds, a routine he repeats three times each day. The geese seem calm enough, despite claims of torture by activists. The technique was developed by the Egyptians over four thousand years ago. After the tour, we sampled foie gras and wine in the gift shop. (In this region, there are foie gras shops on nearly every corner.) Back in Sarlat, we dined on the patio at Le Bistro de l’Octroi. 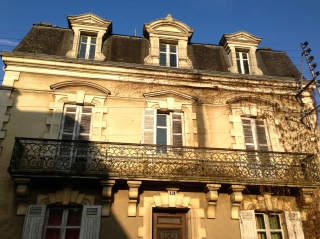 Southeast of Sarlat, we found Copeyre Canoë at Vitrac Port and rented our boats—a canoe for Rob and Mandy, a kayak for me. Soon we were drifting down the Dordogne River, an easy paddle. River weed swirled in the water and bloomed white on the surface. Electric blue damselflies hitched rides on the bow. Occasionally, we bounced on light ripples. About halfway downriver, La Roque-Gageac appeared. Rob and I climbed the steep path up the cliff overlooking the town. The homes, high on perches, seem carved out of the rock. What a fascinating place to live! Back below, we joined Mandy for lunch, then headed downriver. 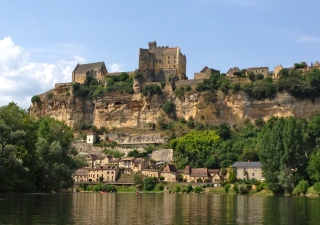 Beached at Castelnaud-la-Chapelle. Again, Rob and I climbed the hill to the castle. Every room was filled with weaponry and every rampart with trebuchets. We watched one hurl a plastic ball in demonstration. Stunning views up and down the river, including the bridge and the next town. Downriver at Beynac-et-Cazenac, we disembarked and rode the shuttle back to our car.

Puycelsi is a hill town in the middle of farm country with a population of just over one hundred. Tired from kayaking, we encountered several obstacles getting there. First, the road uphill to the town was blocked. Rob executed a shortcut across a grassy field around the barrier. 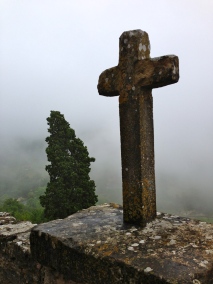 The village’s streets were narrow and twisting, making it difficult to spy the hotel. Once we found it, the front door was locked. Then, it began to rain. Eventually we roused a manager who checked us in.

My room was my favorite of the trip, overlooking a central courtyard and the town’s cathedral. The village in the fog was magical with stone cottages and cobblestone streets. It seemed other-worldly. We ate dinner at Puycelsi Roc Café. The cathedral bells rang every hour all night. I didn’t mind.

After breakfast at the café, we stopped in Castelnau-de-Montmiral on the way to Albi, where we toured the Cathédrale Sainte-Cécile and the Toulouse-Lautrec Museum. Ate lunch at a café on Place Sainte-Cécile. 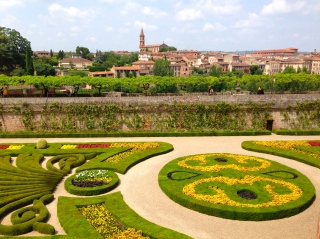 Arrived in Caunes-Minervois late afternoon. Another hill town, more narrow streets, another driving challenge. This time I was at the wheel and gunned the six-speed engine up the steep, tiny streets in Old Town. We were nervous a car would be coming from the other direction as we blindly turned corners. And then it happened—a police car. Politely, it backed uphill and offered us the right of way. Finally, we found Hôtel d’Alibert. Frederic (Fredo), the manager, gave us directions to the hotel’s garage on the next street, a difficult route with more tight corners. He patted my shoulder and solemnly wished me luck, “God bless you.”

My room overlooked the hotel’s courtyard restaurant. We walked around the Old Town, stopping for wine at La Cantine du Cure. Enjoyed dinner at the hotel and Fredo’s quirky humor. He seemed to enjoy pronouncing my name, “Keerk.”

I complimented Fredo on the beautiful environment in which his hotel and restaurant are situated. “It is interesting,” said Fredo. “This we can say.”

After a breakfast of croissants, yogurt, jam, pear juice, and coffee in the courtyard, we drove to Carcassonne. The fortress is magnificent, but the streets inside are lined with tourist shops selling plastic swords. After so many authentically picturesque villages, Carcassonne left me cold. 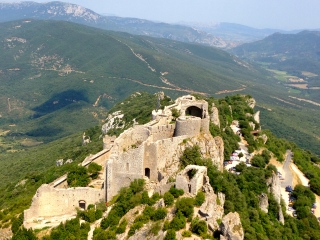 Stopped at a café near Quillan for lunch, then braved the spectacular Gorges de Galamus drive. Because of the narrowness of the road, it is impossible to turn back and forbidden to pass. A gate controls access, allowing traffic from one direction at a time only. Rob drove while Mandy and I gawked over the sheer vertical edges of the cliff. We passed canyoneers in wetsuits and helmets walking along the road toward a trailhead.

Then, Rob and I hiked the rocky undeveloped trail to the ruined fortress Château de Peyrepertuse for a stunning view up and down the valley. 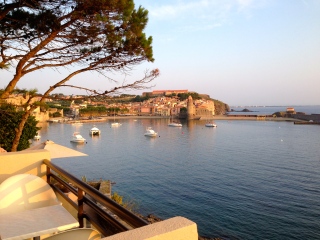 Arrived in Collioure where we enjoyed a postcard view of the Mediterranean town from our balconies at Hôtel les Caranques. Mandy ordered tapas and wine. We walked into town for a dinner of mussels on the beach. Back at the hotel, we sat outside and watched the French coast turn its lights on.

Driving through Barcelona’s busy intersections was a challenge, but Rob delivered us to the rental agency and we turned in our car. A relief actually—we were done with navigating narrow streets, translating road signs, and interpreting gas pumps. We took a cab to the Hotel Ciutat de Barcelona on Carrer de la Princesa at the edge of La Ribera. 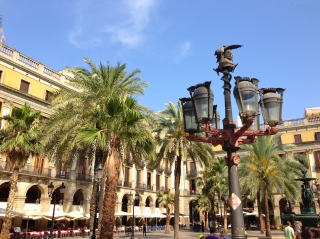 Mandy led us on a tour through the Barri Gòtic and to the Port Vell waterfront where we ate seafood paella and drank sparkling wine. Suddenly, a tall blond women in a bathing suit sprinted across the street and tackled a thief who had stolen her purse while she showered at the beach. She angrily reprimanded him and received applause from the café diners. Walked up La Ramblas, then back to the hotel for siestas.

The heat, humidity and schedule finally caught up with us. Rob bowed out for dinner, choosing to rest. Mandy and I sampled tapas and cava at the crowded El Xampanyet bar. 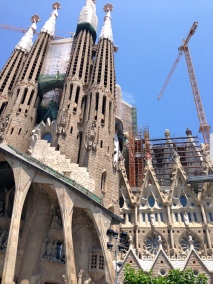 On my own in Barcelona. Rob and Mandy left early for the airport. I slept in a bit, then left the hotel for a bocadillo and café Americano. Toured the Picasso Museum, La Sagrada Família, and the Barcelona Cathedral. Lunch on La Ramblas at the crowded La Boqueria Market. For dinner, I ate tapas at Sagardi near the Church of Santa Maria del Mar.

After a week of French and Spanish food and drink, an early morning six-mile run was exactly what I needed. Robin of Running Tours Barcelona met me outside the hotel at 8 a.m. and we were off on a tour of La Ribera, the Barri Gòtic, and El Raval. He led me expertly through the maze of narrow streets, stopping occasionally to view a plaza, church, or Roman ruin. 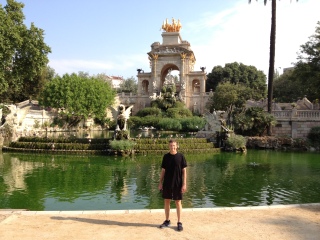 After breakfast, I continued my touring, stopping at the City History Museum with its underground Roman ruins and the Temple of Augustus with its four Roman columns. I rode the tourist bus past Casa Milà, Casa Batlló, and the 1992 Olympic torch. Toured the Miró Museum. Rode the cable car up and down Montjuïc. Walked Las Ramblas, pausing at the Four Cats, once frequented by Picasso and other artists.

The last night of the trip. I enjoyed a glass of wine at La Vinya del Senyor (recommended by Robin) and tapas at Sagardi, both in La Ribera. 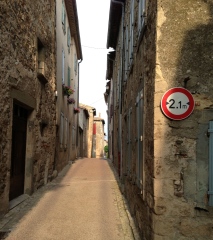 4 Responses to Shakedown tour of the Pyrenees