In the Shetland Islands at the northernmost tip of Scotland, the place names are mostly in Norse.

The majority of the islands’ population of twenty-two thousand have Nordic ancestors. On Norwegian holidays, they fly Norway’s flag.

Although there were inhabitants on Shetland three to four thousand years ago, the Vikings took charge around 800 CE. In 1468, Maraget, a Danish princess, married James III of Scotland. Her father, the king of both Denmark and Norway, couldn’t afford a wedding dowry, so he mortgaged Shetland to his son-in-law. He never got it back.

Shetland is comprised of more than one hundred islands, fifteen of which are inhabited. The leading industries are oil and fishing. Shetland is famous for its wool sweaters and ponies. They graze everywhere (the sheep and the ponies, not the sweaters), often along the side of the road.

When I picked up my rental car in Lerwick, the clerk chuckled, “Shetland is so small, you likely won’t use more than one tank of petrol.” Driving, however, was a challenge as I adjusted to sitting on the right side of the car, driving on the left side of the road, and shifting a five-speed with my left hand.

Day One: After exploring Fort Charlotte in Lerwick, I set out for the Westside and quickly found myself on single-lane roads. “Passing places” appear frequently, which allow for pulling over while vehicles from the opposite direction squeeze by. However, there was very little traffic.

Low rolling green hills and sheep are everywhere in Shetland, but there are no trees. I parked along the side of a road and hiked across the moorland to the remains of Stanydale Temple, a Stone Age community hall, built around 1600 BCE. Oval-shaped stone houses from the same era lay in ruins nearby. I drove to the west coast at Melby for a look at the Atlantic Ocean, then back to Lerwick, surprised at how easily I could cover ground.

Day Two: Breathtaking scenery all along the western coast of the Northmavine peninsula. The one-lane road follows the coast with spectacular views of red sandstone cliffs and sea stacks. Again, beautiful desolation, interrupted occasionally by a friendly herd of long-maned Shetland ponies.

I stopped at the lighthouse at Esha Ness and walked the windy and jaw-dropping coastal trail. Along the way I viewed the Holes of Scraada, a deep chasm connected to the sea by a long tunnel. Inland are the remains of three ancient stone watermills. The scenery is spectacular with sheer cliffs, crashing waves, towering sea stacks, gaping crevices and sea caves, graceful arches, remnants of ancient dwellings, sky-blue lochs (lakes), and sheep everywhere. All in brilliant reds, greens, and blues.

Nearby is Dore Holm, a large sea stack with a natural arch that resembles a horse drinking water.

Day Three: Headed to the South Mainland. At the tip of the peninsula I stopped at the Sumburgh Head lighthouse, hoping to see the puffin colony. Unfortunately, I missed puffin mating season by a few weeks. As the fellow next to me said, “All this way and not a single fookin’ poofin.”

At the nearby Jarlshof excavation, thousands of years of old dwellings are stacked on top of each other. The large site showcases the remains of four-thousand-year-old Bronze Age oval houses, an Iron Age broch (tower house), Viking longhouses from the 800s, and a lord’s manse built around 1600.

One of the two-thousand-year-old Iron Age wheelhouses is nearly intact, stone roof included. It was a thrill to step inside. Amazing that these dwellings had internal partitions and built-in shelves.

Day Four: I had a few hours to kill before the ferry to the Orkney Islands, so I drove down the West Burra peninsula. Stopped a couple of times to pet Shetland ponies. They seem interested in visitors. At the end of a single-lane road I parked and hiked along a beach, through meadows of sheep, past tumble-down stone crofthouses, and up steep hillsides to get a view of the Atlantic coast and the outlying islands. Again, sheer cliffs with waves crashing at their bases. A bird dive-bombed me away from its nest.

In Scalloway I ate a picnic lunch near the Shetland Bus monument. During the Nazi occupation of Norway, the town of Scalloway provided a safe haven for Norwegian resistance fighters who regularly ran arms and resistance workers to Norway on borrowed fishing boats. The operation was called the Shetland Bus.

A one-way trip between the countries took at least twenty-four hours. The Norwegians were in constant danger of being caught by the patrolling Gestapo. The monument is built of stones from both countries, representing the home towns of those killed during the operation. 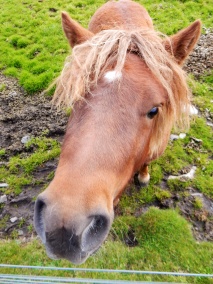 While in Scalloway, I picked up the key to Scalloway Castle at the village’s hotel. (That’s right—they gave me the key to the castle!) It was built in 1600 by Patrick Stewart, Earl of Orkney, infamous for his cruelty. He was eventually beheaded in Edinburgh. (Yes, I returned the key.)

On the way back to Lerwick, I passed the site of Law Ting Holm, where Shetland’s annual Norse parliament met outside in the 1200s.

Every January, hundreds of Shetland men dress as Vikings and march through the streets of Lerwick singing traditional songs and carrying torches. At the conclusion of the procession, they toss their torches into a replica of a Viking longship and burn it to the ground. After the bonfire, the all-night party starts.

This celebration of Norse-ness is called Up Helly Aa. It takes place annually in the Shetland Islands—where Scotland thinks it’s Norway.