Laundry at the edge of the world

Posted on November 7, 2014 by kirkphillips

Where is the edge? Outer space perhaps?

In ancient times, the edge of the world was the southwestern tip of mainland Europe, Cape Saint Vincent in the western Algarve region of Portugal.

Several civilizations reached the cape, including the Phoenicians, Carthaginians, and Greeks. The Romans called it Promontorium Sacrum (Holy Promontory). From the cliffs, they watched the sun set into the sea, marking the extremity of the world as they knew it.

The cape is named for Saint Vincent, a martyr tortured for his religious beliefs by the governor of Spain in the 900s. Some of his relics were carried by followers escaping persecution to the western Algarve. According to legend, a flock of ravens protected his shrine. Later, the relics were moved to the cathedral in Lisbon and the raven became the symbol of Portugal’s capital.

In the 1400s, Infante Dom Henrique de Avis, better known as Prince Henry the Navigator, adopted the western Algarve as his second home and location for his navigation school. Henry, the fifth son of King John I, gets credit as the instigator of the Age of Discoveries. A big thinker, he is behind the development of the caravel, a lighter ship that could sail farther and faster. He helped pioneer new methods of navigation and sponsored numerous voyages down the coast of Africa.

Henry directly influenced Columbus, Magellan, Da Gama, Dias, Cabral, and other explorers. As a result of the advancements made under his direction, he gets credit for opening the world to trade with India and later the Americas. (It is important to acknowledge that Henry’s sponsored voyages also brought African slaves back to Europe’s first slave market in Lagos, Portugal.) In 1587, Sir Francis Drake of England wreaked havoc on the Portuguese coast, destroying most of Henry’s school.

I spent several days in Salema, a sleepy village shared equally by traditional fishermen and British ex-pats. The cobblestone Rua dos Pescadores (Street of Fishermen) is lined with white and pastel cottages. The mile-long beach of golden sand is cropped at each end by jagged rocks. Octopus jars are stacked along the boardwalk. A community tractor drags the fishing boats to and from the surf. Tourists pack the restaurants every night for the catch of the day. A colony of well-fed feral cats have the run of the place. I climbed hiking trails along the edges of cliffs, sometimes scrambling on rocks, occasionally descending to hidden beaches where there were no footprints. 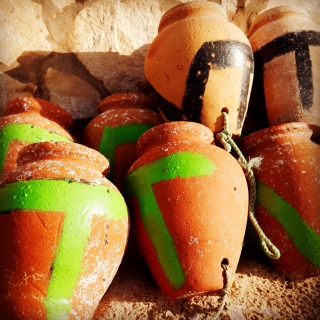 Further west on the tip of Portugal is Sagres, a sprawling beach town, a bit run down or perhaps just worn down by the endless wind and sun. These days it’s a surfing mecca, known for picturesque rocky coves and monster waves. At the marina, I watched the fishing boats unload their catches onto the pier. They sorted the fish into plastic bins by species and size. Inside the warehouse, the bins were placed on a conveyor belt, weighed, and electronically tagged. Buyers in a grandstand bid on the bins as they passed by on the conveyor. I decided on golden bream for dinner.

I visited Fortaleza on the Ponta de Sagres, the site of Henry’s school, where local fishermen dangle their lines precariously over the cliff edges, angling for fish in the surf eighty yards below. A huge “wind compass,” outlined in the sand with stones, is all that remains from Henry’s time. Some interpret it as a navigational aid. 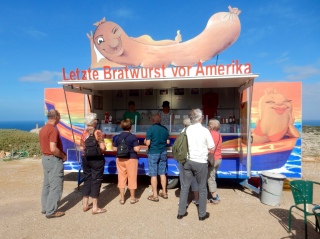 Further west is Cabo de São Vicente (Cape Saint Vincent). It’s lighthouse is seen by ships from all over the world. Thundering waves carve sea stacks and grottoes from its foundations. On top, I bought a sandwich from the Last Bratwurst Before America stand.

North up the coast, I drove the one-lane cliffside road down to Castelejo Beach. The waves were massive, relentlessly pounding the rocks. An impressive natural spectacle. I sat on the polished stones and watched the show for hours, mesmerized. The air was filled with sea spray. 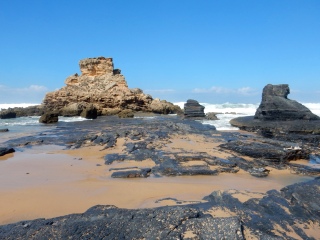 Traveling light, as I do, requires doing laundry frequently. Some B&Bs provide the service, or make washers and dryers available. Sometimes I use a laundromat (or launderette as they say in Scotland) or a retail service. In Sagres, desperate for clean clothes, I was surprised there was no laundry of any kind.

I was directed to a rumored laundry service in the next town, Vila do Bispo. I drove the narrow cobblestone streets, stopping numerous times to ask for directions. Finally, I found it, a tiny hole-in-the-wall shop on a side street. The laundress didn’t speak English, but we agreed to the price (two euros and twenty cents per kilo of clothes). However, she couldn’t deliver until the next day and I was reluctant to leave my only clothes overnight in a separate town. I left.

Back in Sagres, I asked (with an aggravated tone) a hotel clerk how it was possible that an area depending on tourism has no laundromat.

She shrugged, “It’s the edge of the world.”

She was right. Clean clothes are merely a luxury at the edge of the world.

1 Response to Laundry at the edge of the world