The Saga of Sagitta (Part 2)

Posted on February 1, 2015 by kirkphillips 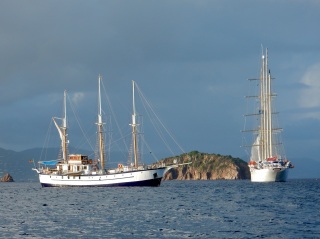 I’m at sea on a 120-foot three-masted sailboat, Sagitta, touring some of the Leeward Caribbean islands and feeling somewhat disconnected from the real world. To read “The Saga of Sagitta (Part 1),” please see the previous post.

Day Six: Sagitta sailed west from Marina Cay to Jost Van Dyke (pronounced YOST). The island may be named for the seventeenth-century Dutch privateer, Joost van Dyk, who used its harbors as a hideout. (A privateer is a mercenary, essentially a pirate paid by a government.) On the way the dinghy circled the ship a couple of times, allowing us to take beauty shots of Sagitta under full sail for our photo albums. I saw several sea turtles on the surface during the trip along the south side of Tortola.

At three square miles, Jost Van Dyke is the smallest of the four main islands composing the British Virgin Islands (BVIs). Volcanic in origin, its population is three hundred. Not much happened on Jost until the mid-eighteenth century when slaves were brought from Africa to cultivate cotton and sugarcane. The island is known for charcoal production and sailboat building. The video of Kenny Chesney’s song, “No Shoes, No Shirt, No Problems,” was taped on and around Jost Van Dyke.

We anchored in Great Harbour. After lunch, I ran a few miles from Great Harbour through White Bay to the west end of the island. Extremely steep hills. In places the road was gravel. At the top of West End Hill was a grassy knoll and a cairn, where I left a stone. Ran back to White Bay and joined my group at the Soggy Dollar Bar, where the Painkiller drink was invented. When the place first opened, there was no access except by water. (There is now a road from Great Harbour, but still no dock.) To reach the bar, boaters anchored off the beach, swam ashore, and bought their drinks with soggy dollars, hence the name.

When I arrived from my run, swimwear-clad patrons stood three-deep waiting on their Painkillers. A drunk young woman in a white bikini, a bridal veil, and a sash reading, The Future Mrs. Hinson, wrestled in the sand with a huge blow-up Godzilla. When the bachelorette party attempted to calm her, she berated them, “Get up to my level! Get up to my level!” Something for Mr. Hinson to look forward to.

Day Seven: A wet, bouncy landing in the dinghy on Sandy Cay, a national park. (The difference between wet and dry landings may be obvious but, just in case, a dry landing requires a dock.) Sandy Cay is an uninhabited island between Tortola and Jost Van Dyke, once owned by the Rockefellers. It now belongs to the National Parks Trust of the Virgin Islands. A shipmate and I hiked the inner trail around the island, just half of a mile, partly sandy, partly rocky. The trail was crawling with hermit crabs and lizards of all sizes. Under a spooky tree at the center, we found a grave marker dated 2006, a spot where someone’s family likely scattered ashes. Swam and snorkeled, then headed back to the ship.

The crew pulled anchor for Soper’s Hole at the West End of Tortola. After dinner we went ashore. The female bartender at Pusser’s asked one of the passengers whether he wanted two, three, or four fingers of rum in his drink. “Isn’t it one, two or three?” he asked. She replied, “We start at two.”

Day Eight: As Sagitta was not cleared for anchoring in the US Virgin Islands (USVIs), we dinghied to Soper’s Hole and then traveled via ferry to the island of Saint John.

Saint John is twenty square miles with a population of five thousand. Its only access is by boat. Approximately sixty percent of the island is part of the Virgin Islands National Park. Saint John was first settled by the Arawaks who migrated north from South America around 300 CE. In 1493 Christopher Columbus arrived in the islands, naming them Eleven Thousand Virgins. (He also named Virgin Gorda, indicating an apparent fixation on virgins.) The Danes settled the island (along with Saint Thomas and Saint Croix) in 1718 and named it Saint John. The establishment of sugarcane plantations led to the importation of African slaves to provide labor. In 1917, the United States purchased the islands from Denmark.

Lots of immigration and customs paperwork was required at both ends as we moved from the BVIs to the USVIs. On the way, waves crashed over the ferry and through the open windows, soaking people. We hired a taxi, Mr. Wonderful, to transport us to the popular tourist beach at Trunk Bay. Mr. Wonderful stopped the taxi long enough for us to take panoramic photos of Cruz and Caneel bays.

I snorkeled the 225-yard underwater trail at Trunk Bay, also part of the Virgin Islands National Park. The water was crowded with splashing “one-horned butt-fish,” also known as snorkelers. A few real fish were present, but the coral was quite trampled by the hundreds of thousands of snorkelers who visit it each year. A squall chased us from the beach. We taxied back to Cruz Bay, Saint John’s main town, and explored it while dodging two or three more squalls. Eventually we ferried back to Soper’s Hole and another round of customs paperwork.

My social-media feed was full of pre-game hype, but only one other person out of the thirty-one on board was aware of the College Football Playoff national championship game. “Who’s playing?” they asked. I got the same reaction in Soper’s Hole. “There’s a game tonight?” For thirty dollars I subscribed to ESPN UK, a network which typically shows rugby and cricket. Sure enough, at game time the Buckeyes were on. Midway through the third quarter, I lost the video feed but was able to listen to the victory via audio. No one else on the ship was awake.

Day Nine: As we prepared to leave Soper’s Hole, the crew had difficulty raising the anchor. Apparently it was stuck on the bottom ninety feet down. After maneuvering the ship and pulling from different directions, the anchor was dislodged and a section of chain retrieved. However, the process strained the winch motor. The crew spent all day replacing it with a spare, while we motored to the Bight at Norman Island. The six-hundred-acre island is privately owned and uninhabited. It is considered one of the Little Sisters, along with Pelican, Peter, Salt, Cooper, Ginger, Carvel Rock, and Dead Chest islands.

Norman Island may have inspired Robert Louis Stevenson’s Treasure Island. In 1750 a Spanish galleon named Nuestra Señora de Guadalupe sought shelter from a storm on the Carolina coast. The crew mutinied and the treasure, fifty-five chests of silver coins, was loaded into two ships. The first perished, but the second escaped to Saint Croix. After disposing of some of the money, the crew proceeded to Norman where the treasure was buried. They were later arrested, but word of the treasure spread. Residents of Tortola went to the island, found it, and dug it up for themselves. As their reward, they were allowed to keep a share.

Some of my shipmates went ashore. Some snorkeled. I relaxed on deck, still tired from staying up until 1:30 a.m. to listen to the Ohio State–Oregon game. (The broadcast started at 9:30 p.m. in the BVIs.) In the afternoon I went ashore to Pirate’s Bight. A game of giant Jenga was underway on the beach, using blocks made from two-by-fours.

Back on board, the ship’s engineer proudly led a tour of the engine room, surprising given that he had worked all day at replacing the winch motor. While I wore headphones to protect my hearing, he explained the complexities of the engines, generators, and pumps, all running the various shipboard systems. I couldn’t hear a word. After dinner, five of us went to Willie T, a restaurant and bar on a barge on the water. William Thornton II was a ninety-eight-foot schooner that was converted into a restaurant and anchored at the Bight in 1996. Then it sank. Its namesake is popular with boaters who jump from the ship’s deck into the water, usually naked and always inebriated. 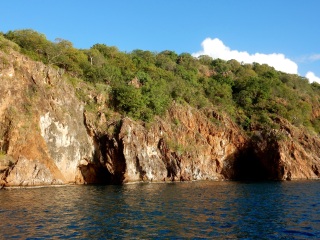 Day Ten: Ten days into the cruise and I need clean clothes. There is no laundry service on board. I attempt to freshen my wardrobe by wearing it on deck in the sun and the wind. I’m fooling no one.

Just west of the Bight are the Caves, three water-level openings at the base of cliffs. I snorkeled the Caves for an hour, swimming through school after school of fish. Others saw a barracuda.

To keep track of the whereabouts of twenty-one passengers, Sagitta’s crew employed a card system. A plastic numbered card was distributed to each of us each time we disembarked and collected each time we reboarded. At the end of the day, the cards were checked to determine if anyone was MIA.

After lunch we were expecting to sail to Peter Island. However, as the anchor winch was still not working properly, the captain decided to sail through Sir Francis Drake Channel and anchor in Road Town, Tortola, instead. More resources were there for repairing the winch. Upon arriving in the harbor, we posed for group portraits on deck, one of the passengers and one of the crew. As a few of the group are leaving the cruise tomorrow, the Captain’s Dinner was held a day early.

Day Eleven: I ran a few miles along the harbor in Road Town, first one direction from the dock and then the other. Showered on the ship and returned to shore, where I ate lunch and purchased additional sunblock and insect repellant. Dinghied back to the ship and packed. Most of the others were doing the same—packing, taking photos, exchanging contact information, enjoying the aftenoon sun on deck. The occupants of the large owner’s cabin gave tours and I countered with a tour of my “coffin.” At a second Captain’s Dinner, the crew were introduced one by one. We thanked them with cheers and high fives. I climbed into my bunk for the last time.

Day Twelve: Up early for a buffet breakfast. Bags out of the cabins by 8 a.m. We boarded the ferry in Road Town, Tortola, and arrived in the harbor at Charlotte Amalie (ah MAUL yuh) on Saint Thomas (USVIs) an hour later. There was a delay getting us offloaded, but once through customs the group quickly splintered, some to the airport and some to hotels. I checked into a B&B on Government Hill with a view of the harbor. A direct-sales presentation was in progress on the patio, regarding, what else, jewelry. Every store in downtown Charlotte Amalie sells duty-free jewelry.

Back to reality. The manager gave me directions to a nearby laundromat. I packed my dirty, salty, wet, sweaty clothes in my backpack and boarded a dollar bus. Dollar buses (or safari taxis) became commonplace after Saint Thomas was devastated by Hurricane Marilyn in 1995. Local entrepreneurs circumvent the public-bus system by offering rides along a regular route for only a dollar. Safaris are covered, open-air trucks with bench seating in the back. They are unmarked and unregulated. Passengers may flag one to stop anywhere on the route. Doorbell buzzers are used to alert the driver to stop. The driver is paid his dollar immediately upon disembarking.

Laundry done, I returned to the B&B and settled into a real bed to sleep.

4 Responses to The Saga of Sagitta (Part 2)