The key to the highway 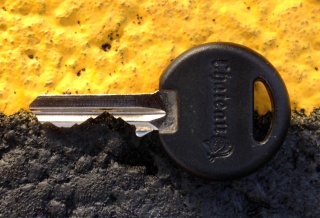 But before it could, I made a series of life-changing decisions.

I left a company that bears my name. I retired from a forty-year career. I sold my house. I sold or donated most of my possessions, including my car, and stored the rest. I said goodbye (temporarily) to family and friends.

In 1967, psychiatrists Thomas Holmes and Richard Rahe developed a scale for stressful life events. All of the above are on the list.

I must remind myself that I willingly volunteered for this makeover.

For several weeks in a row, family and friends have treated me to a farewell tour of coffees, lunches, drinks, and dinners, congratulating me on my retirement as well as my traveling plans. Some jokingly suggested I delay the trip to milk the situation further.

The agency staff took me for a fun ride down Memory Lane (also known as City Park Avenue, East Sycamore Street, Spruce Street, Park Street, and Goodale Boulevard, all former locations of our company), and on a World Tour of Columbus.

After a fake send-off, complete with warm cans of beer and bowls of pork rinds, we boarded a shuttle bus for Barcelona in German Village and Marcella’s in the Short North. Back at the agency, my partners gave heartfelt tributes and unveiled a life-size cardboard cutout of me. The staff shared remembrances and good wishes in an e-book and played a recorded parody of Jackson Browne’s “The Load-Out/Stay.” They lined up for goodbye hugs and debated whether to have photos taken with me or my cutout.

With good friends like these, warm beer and pork rinds would have suited just fine.

My house sold in April. I camped in it for two more months, as the furniture began disappearing. Toward the end, I was sleeping on a mattress on the floor like a college student. Life comes full circle.

In June, I helped my son move his belongings out of his room. He lived in the house since the age of ten. We have memories of celebrating birthdays and holidays in the house, of building a treehouse, and of shooting hoops in the driveway. My daughter moved out a couple of years ago.

Moving day was more hectic than I planned, but I was somewhat relieved there was little time for melancholy. In truth, I feel a little more uneasy than I anticipated at no longer having a permanent residence.

My cat’s foster family set up an Instagram account for him. I can see from the photos Mac is beginning to settle into his temporary home and get comfortable with his new friend, Omar.

Affecting these changes required nearly two years of planning. However, I tried not to allow the details to distract me from celebrating this milestone in my life.

To read about my planning, please see a previous post, “Clearing the decks.”

At the end of June, I relinquished the keys to my office. A few days later, I left my house keys behind for the new owners. Soon I will surrender the keys to my car. The only key left on my ring is to the storage locker. And, in a way, to whatever happens next.

3 Responses to The key to the highway