Making myself at home in Edinburgh 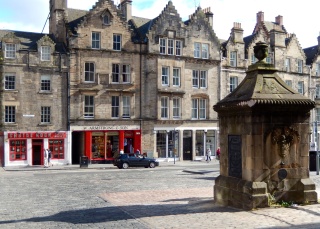 After fighting off the cold I brought with me from the States and adjusting to the time difference, I’m starting to settle in to my stay in Scotland’s capital city.

The hotel is within walking distance of both the New and Old Towns. My studio includes a microwave oven, two-burner stove, sink, refrigerator, teakettle, and assorted kitchenware.

The shower is so small I can barely turn around, but there’s plenty of pressure. A duvet on the bed but no cover sheet. All is brand new.

Up and down the street are hotels, apartments, and hostels, all in ancient buildings, many under renovation as this area is in the process of gentrifying.

As planned, I installed a Lebarra SIM card in my cheap mobile phone and was assigned a number to use while in Scotland for talking and texting. The cost was ten pounds, about eighteen dollars, which I can “top up” as needed.

I bought groceries for my studio at Sainsbury’s, although I am unfamiliar with most of the brands. The Scots love their sweets—the selection of baked goods, biscuits (cookies), and marmalade was extensive. Not so much the fresh produce. Doing laundry at the hotel is expensive. One load cost £2.50 ($4.50) to wash and £1 ($1.80) to dry. Fortunately, I’m not traveling with many clothes.

There is a coffee shop or bakery on every corner and twice that many sandwich shops and pubs. No discernible fast-food brands, which does not mean the cheese-and-bacon breakfast sandwiches are healthy. “Take-away” is common, as most establishments have limited seating. They all close in the early afternoon except the pubs, of course. Tipping is not expected, but I usually round up to the nearest pound. Extravagant Americans! 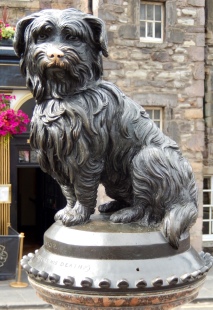 My vision for this trip involves staying in each location for an extended period of time—long enough to pretend to live locally. I’ll be in Edinburgh for four weeks before moving on to the Highlands. Enough time to learn to look right just before stepping into the street. (They drive on the left.) Enough to learn to make change in pounds and pence without holding up the line. Enough to learn the correct pronunciation of local place names. (A local Edinburgher corrected me: It’s “ED in bahr” not “ED in burro,” and especially not “ED in burg.”)

The Scots are friendly. And funny.

3 Responses to Making myself at home in Edinburgh