The city of Pafos is also known as Paphos. And Baf. And Gazibaf. And Ktima. And Kasaba. Every place on Cyprus, it seems, has two or more names.

A crossing point I used between Cyprus and northern Cyprus is known as Zohdia, Astromeritis, Morpho, Morfu, Güzelyurt, Omorfo, and Morfou. Seven names for one place.

Some places (Ktima, for example) retain their ancient names. Some have locally known names that are still honored. In northern Cyprus, place names were changed from Greek to Turkish, following the 1974 invasion by Turkey, and are known by both.

One name may appear on a map or navigation device and a different name may be indicated on a sign, creating difficulties for foreign drivers (me). I might be looking for, say, Agios Dometios, but am greeted instead with signs for Metehan or Kermia. It’s the same place. 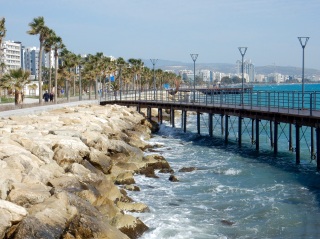 After leaving Larnaka, I arrived at the city of Lemesos on the south coast.  (To read about Larnaka, please see the previous post, “That state up north.”)

The promenade along the harbor is beautiful, long and well-designed with board walks waggling at angles into the sea. Lots of playgrounds, sculptures, and fountains. Lemesos is the second largest city in Cyprus with a population of approximately 250,000. Its port is one of the busiest in the Mediterranean. The marina is new with upscale hotels and apartments. Built between two ancient cities, Lemesos today sprawls along the shore. The Old Town is west near the marina. Casinos, cabarets, and high-end hotels, such as Four Seasons, give the east end a Vegas vibe.

Lemesos seems busier and noisier than Larnaka. More graffiti and trash. People pull their cars over the curbs and park on the sidewalks. Drivers race muscle cars at night. Motorbikes zoom everywhere. The streets are congested with traffic. There are few crosswalks. In general, Cypriot towns are not pedestrian-friendly.

However, I enjoyed exploring the narrow zigzag streets of the Old Town. A gypsy woman played an accordion at the corner. A crowd celebrated the Vietnamese New Year. I relaxed at a café with filtered coffee, an anomaly. Locally, everyone drinks frappés, foam-topped iced coffees made with instant coffee.

The cashier struggled when writing my name Starbucks-style on the paper cup. She scrawled K, undecipherable symbol, K. I think she didn’t want to write the symbol for the Greek letter rho, as it would look like this: KIPK. 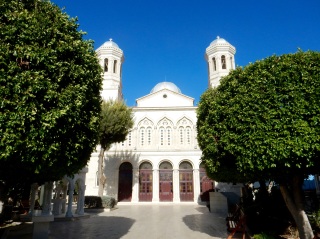 I toured Lemesos Castle, built in the fourteenth century. Like most castles, it has been rebuilt many times. The Venetians destroyed it, earthquakes leveled it, the Ottomans fortified it, and the British used it as a prison.

King Richard the Lionheart married here in 1191 CE, during the Third Crusade. In the process, he crowned himself King of Cyprus. The Medieval Museum of Cyprus is located inside.

The separate Lemesos Archaeology Museum houses an extensive pottery collection, ranging from the Stone Age to the Roman period.

The areas around the castle and the market are crowded with restaurants and nightclubs with one-word names like Industry, Pi, and Theory. Occasionally I hear what I think is Russian spoken on the street. It is estimated that one-half to one-third of all Cyprus bank deposits are Russian. Historically, Cyprus was a tax haven and money launderer for wealthy Russians, but not as much since the Cypriot bank crisis of 2013. Apparently the big money has moved to the British Virgin Islands.

In the morning when I checked out of my apartment, the landlord determined my electrical usage from the meter and charged me for it. Cypriots pay the highest rate for electricity in the European Union, twenty-six percent more than the EU average.

Heading west along the coast, I stopped at Kolossi Castle, a former Crusader stronghold, built in 1210 CE by the Franks.

The area around the castle is known for producing a dessert wine, Commandaria. At the banquet following King Richard the Lionheart’s wedding at Lemesos, he declared it to be the “wine of kings and the king of wines.” (He may have developed Budweiser’s slogan as well.) Made from sun-dried grapes, Commandaria is the world’s oldest name-brand wine continuously in production.

Kourion was an important city-state occupied from the Stone Age through the Early Byzantine period. Its extensive remains are located on a high bluff with a stunning view of the Mediterranean.

Many of the structures have well-preserved mosaic floors:

I drove past Aphrodite’s Rock, the mythical birthplace of the goddess where the surf relentlessly pounds sea stacks. Aphrodite is the Greek version of Venus, the goddess of love, beauty, and fertility.

I stopped in Kouklia to tour the large outdoor altar site, once surrounded by walls and doors, which was dedicated to the goddess. From the twelfth century BCE onward, she was worshipped on a grand scale. Homer mentions her altar at Kouklia in the Odyssey.

Pafos, a popular tourist resort, has a population of about one hundred thousand. The area called Kato Pafos, by the harbor, is the location of several luxury hotels. None were available when Paul the Apostle visited during the 1st century. The promenade, lined with restaurants and attractions, has been extravagantly upgraded. 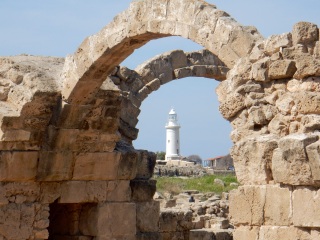 I toured Kato Pafos Archaeological Park, which is on the UNESCO list of cultural treasures of the world. Its sites and monuments date from prehistoric times through the Middle Ages. Many of the ruins contain extensive mosaic floors. The park is still under excavation.

North of Pafos, I had some difficulty finding the apartment in Goudi, a village on the bank of the Chrysochou River. With a population of approximately one hundred and fifty, it’s easy to miss. The entrance to the village is off of the main road and up a steep hill on a narrow lane, surrounded by orange groves. My apartment was one of five small stone cottages adjoining a courtyard and protected by a wooden gate.

Polis (aka Marion and Arsinoe)

I went for a run on back roads through orange and lemon groves from Goudi to Polis and back. According to legend, Akamas from Athens, disembarked near Polis after the Trojan War and gave his name to the Cape of Akamas. Polis was settled between 1400 and 1100 BCE. In town I visited the Church of Saint Kyriaki and stopped to admire a seven-hundred-year-old olive tree. Drove west to the Baths of Aphrodite. She wasn’t there, but in fairness, the surf was quite rough. Aphrodite met her lover, the good-looking Adonis, when he stopped off at the baths for a drink of water while hunting.

I left Goudi and headed toward northern Cyprus, the Turkish-controlled side of the island. After the mountains, I passed through the last town on the unoccupied side, Kato Pyrgos (also known as Aşağı Pirgo) and arrived at one of the island’s five crossing stations. The police officer at the gate told me I must buy car insurance in town before I would be allowed to cross. (Buying insurance is a requirement when traveling to northern Cyprus with a car rented on the unoccupied side.)

He suggested I ask about insurance at a particular kafeneio (café). I found it on the main street, filled with men of all ages, sipping coffee, playing backgammon, smoking, and talking. A relaxing Sunday afternoon. They all glanced at me, the stranger, when I entered. Eventually I was introduced to a friendly gentlemen who was apparently the agent. He took me to his nearby office, reviewed my credentials and quickly completed an insurance form. Thirty-five euros ($37.95) for one month of coverage.

I drove back to the checkpoint. After my passport was scanned by the Cyprus guard, I drove a few hundred yards through the buffer zone to the station on the Turkish-controlled side. Again, my passport and the insurance form were examined. Quickly, I was through the checkpoint and driving past beach towns along the north coast toward Girne (also known as Keryneia and Kyrenia).

Except that my navigational aid was worthless.

They were in Greek and all of the signs were in Turkish. I stopped at a gas station and simply waved my map at the attendant. Without a word, he quickly handed me a Turkish one.

2 Responses to Also known as