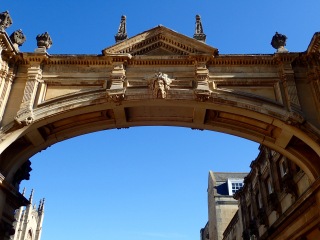 It’s an old story. Father sends son away to college. Son returns home with a social disease. Son is thrown out of the house.

In this telling, the father is the king of ancient Britain. The son is a prince and next in line to the throne. The disease is leprosy, once greatly feared.

The son, named Bladud (meaning Wolf-lord), returned home from Athens, Greece, after hearing of his father’s death. Instead of being crowned king, he was treated as an outcast, due to the stigma associated with leprosy and the unsightly sores on his skin.

Bladud was imprisoned but escaped to the countryside. In hiding, he worked as a swineherd near what is now Bath, England. While tending to the pigs, he noticed that the mud, in which they enjoyed wallowing, was warm, even in the winter. Soon he joined the pigs in the hot bath and, after repeated exposure, saw that his sores were healing. The mud baths cured his disease.

He was restored to his rightful place as king and, in thanks, founded a town around the natural hot spring. He dedicated the town to Sulis, a life-affirming Celtic mother-goddess. Bladud ruled for twenty years in the 800s BCE and was succeeded by his son Leir. (Shakespeare based his play King Lear on Leir’s story.)

After their invasion of Britain, the Romans changed the town’s name to Aquae Sulis (waters of Sulis). The Romans associated the goddess Sulis with their own goddess Minerva, a common practice.

They constructed a temple to Sulis-Minerva in 60 CE and, later, a bathing complex around the spring. The spring’s water is heated naturally by the earth, ten to fifteen thousand feet below the surface. It emerges at one hundred and fifteen degrees at a rate of over two hundred and fifty thousand gallons per day.

In the 100s, the Romans enclosed the pool and added a caldarium (hot bath), tepidarium (warm bath), frigidarium (cold bath), and some massage rooms.

During an archaeological excavation of the Sacred Spring in 1979–80, one hundred and thirty Roman “curse tablets” were found. Curse tablets are written requests to Sulis-Minerva to intercede on behalf of the plaintiff.

The tablets are small metal sheets, made from lead. They were inscribed by hand during the 100s, 200s, and 300s CE. Most of them accuse someone of theft, often by name, and typically of clothing or jewelry stolen while bathing. They request justice. An example:

Docimedis has lost two gloves and asks that the thief responsible should lose their minds and eyes in the goddess’ temple.

Over the centuries, the baths fell into disuse and disrepair. Until the Victorians rediscovered them.

Claims regarding the water’s ability to heal prompted a resurgence of interest in Bath. It became a popular spa town in the 1700s.

Visitors came to Bath to “take the waters” by soaking in the baths and drinking the water in the Grand Pump Room.

I arrived in Bath by train from Paddington (of “the Bear” fame) Station in London. The city looks like a movie set, with preserved Georgian architecture cast in magnificent glowing yellow stone. A city of ninety thousand on the River Avon, Bath is a World Heritage Site. 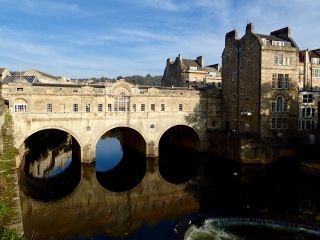 I toured the baths and the museum, all underground and much larger than I expected. The museum displays several recovered elements from the original Roman temple, including the huge snake-haired Gorgon-style head that once looked down upon worshippers.

Items found near the baths include more than twelve thousand Roman coins and the bronze sculpture of the head of Sulis-Minerva. A statue of scab-free King Bladud overlooks the King’s Bath. All are impressed that the lead-lined bathing pool built by the Romans two thousand years ago still holds water.

I took the free walking tour offered by the city with passionate local guide Collin. He relayed 2½-hours’ worth of historical and architectural history, including:

As Collin pointed out, if it were down to you and one other investor and the other invited you to dinner, you might be a bit wary.

Next day, I walked to Bathampton and back, a few miles each way along the Kennet and Avon Canal. The waterway was crowded with canal boats, some of them maneuvering through the over one hundred locks.

The overall canal is eighty-seven miles long, including connected rivers, and links Bristol in the west to Reading in the east. The Kennet and Avon is popular for boating, fishing, walking, cycling, and wildlife conservation. It has been restored largely by volunteers. 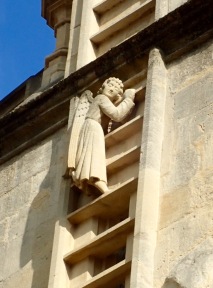 While ordering dinner at a restaurant in Bath, I was told, “The irish stew is off.” I thought perhaps this meant it wasn’t up to the usual standard. Turns out, they were simply out of it.

It was quiet as a tomb in downtown Bath on a Sunday morning after the previous day’s rugby match, Bath vs. Exeter Chiefs. I boarded a small tour bus, along with thirteen others, mostly Americans, and headed east.

Tim the guide hustled us to Stonehenge in the hope of beating the crowds. Still, at opening time, there were five coaches already there.

Everyone recognizes Stonehenge, the iconic ring of massive standing stones and a symbol of Britain. Many of the original stones have fallen or been removed. Archaeologists believe the arrangement was constructed between 3000 and 2000 BCE. Its original purpose is unknown, perhaps a temple, burial place, or astronomical observatory. Several hundred burial mounds surround it.

We lingered for a while, soaking up the prehistory. The stones’ scale and their positions are remarkable to contemplate. They are brooding giants, mysterious and powerful, even when surrounded by tourists. Despite the acres devoted to parking, dining, and souvenir-buying, the formation seems well protected for the immediate future.

We stopped to see the Alton White Horse, a chalk hill carving in Wiltshire. The hill figure was created in 1808 and is one of the seven or eight still visible out of the fourteen known to have existed in the area. We also passed the Cherhill White Horse on Cherhill Down. Dating from the late 1700s, it is the third oldest of the white horses in Great Britain.

Hill figures of human and animal forms have been created since prehistory. No one knows the reason. They are usually created by excavating the top layer of soil to expose the white chalk beneath.

We stopped to walk around Lacock, an impossibly cute village, full of thatched-roof cottages from the 1700s. The village is owned almost in its entirety by the National Trust, due to its unspoiled historical appearance. It has been used as a set for Pride And Prejudice, two of the Harry Potter films, and Downton Abbey. Even smaller and more picturesque is Castle Combe, a location for Doctor Dolittle and War Horse.

Approaching Avebury, we stopped for a quick view of Silbury Hill, a prehistoric man-made mound, the tallest one in Europe. It is about the size of the smaller pyramids in Egypt. Again, no one knows why it was built; however, it is believed to be associated with both Stonehenge and Avebury.

The Avebury Circle is a much larger installment than Stonehenge. The stones are smaller but the circle is bigger and more complex in design. Constructed around 2600 BCE, the monument includes a large henge (bank and ditch), a large outer stone circle, and two separate smaller stone circles inside. At over one thousand feet in diameter, it is the largest stone circle in Europe. Of the original two hundred and fifty-five stones, sixty are left in place.

During the Middle Ages, a village grew within the circle. That’s how big it is. Eventually, locals knocked over or destroyed many of the standing stones around the henge, for agricultural or religious reasons. The townsfolk were encouraged by church officials to believe the site was associated with devil worship and to “de-paganize” it. 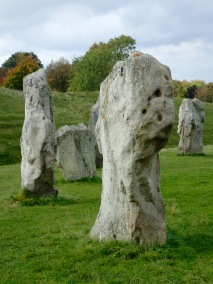 Today Avebury has been adopted as a sacred site by many different pagan religions such as Druidry, Wicca, and Heathenry. Contemporary worshippers perform their rites publicly on major days of celebration such as the summer solstice.

Tim the guide told us the story of one of the stones, known as the Barber-Surgeon Stone.

In the 1300s, a traveler was asked by the Avebury townsfolk to help knock down and bury the stones. As he was digging around the base of a particular stone, it toppled and crushed him.

When the stone was lifted in 1938, his remains were found, along with coins, scissors, and a medical probe. The traveler was identified as a probable barber-surgeon, two occupations commonly practiced by the same individual in medieval times.

His remains currently reside at the Royal College of Surgeons in London. A more recent examination suggests he was intentionally buried under the stone, not crushed by it.

The cause of his death and the reason for his unusual burial beneath the fallen stone remain a mystery.

The only witness, the Barber-Surgeon Stone, stands again.